On November 1, 2021, at 12.00 o'clock, a meeting with the conqueror of Everst, Kyrgyz climber, manager, entrepreneur, diplomat, and former employee of the national security agencies Eduard Kubatov will take place at the Main Hall of OshSU.

Eduard  Kubatov was born on January 2, 1972 in the Issyk-Kul region.  He is retired lieutenant colonel of the special services. He is fond of mountaineering. On February 3, 2013, a mountaineering expedition, in which he was part, planted the flag of Kyrgyzstan on Mount Aconcagua in South America.

He is also fond of boxing, the national kok-boru team game and triathlon (participant of the 2017 World Cup in Abu Dhabi).

Eduard Kubatov is the second Kyrgyzstani who managed to conquer Everest. The first was Dmitry Grekov in 1997. 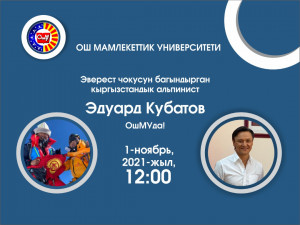 Admission to the Orenburg State University for the spring semester

Admission to the academic mobility program of Sivas Republican University